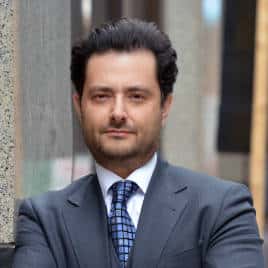 CONTACT THIS LAWYER TODAY
Get the legal help you need.

Email this lawyer's bio to a friend.
← Go Back

Matthew Friedberg is a respected criminal defence lawyer in Toronto.

He is a founding partner of the prominent Toronto defence law firm Caramanna Friedberg LLP.

Matthew Friedberg has successfully defended thousands of accused clients before every level of court in Ontario.

He welcomes the opportunity to help you at this time of great anxiety.

Mr. Friedberg represents clients in Toronto, the GTA and throughout Ontario charged with Criminal Code offences as well as those needing legal representation before inquests, tribunals, regulatory and professional discipline hearings.

An Experienced Defence Lawyer in Toronto

Criminal charges are serious. The mere laying of a criminal charge can have severe repercussions on your relationships, employment and reputation.

You need an experienced criminal defence lawyer advocating for you and protecting your rights and best interests.

Mr. Friedberg regularly represents individuals charged with extremely serious offences and many of his cases have been the subject of media attention.

Matthew Friedberg handles every case he takes on with skill, intelligence, thorough preparation and resolute determination.

The sole aim – always – Is to achieve the best result possible for YOU.

Information about the ad poster

Other items listed by Top Lawyers

Are You a Top Lawyer? Join Today!

A Lawyer in What City?